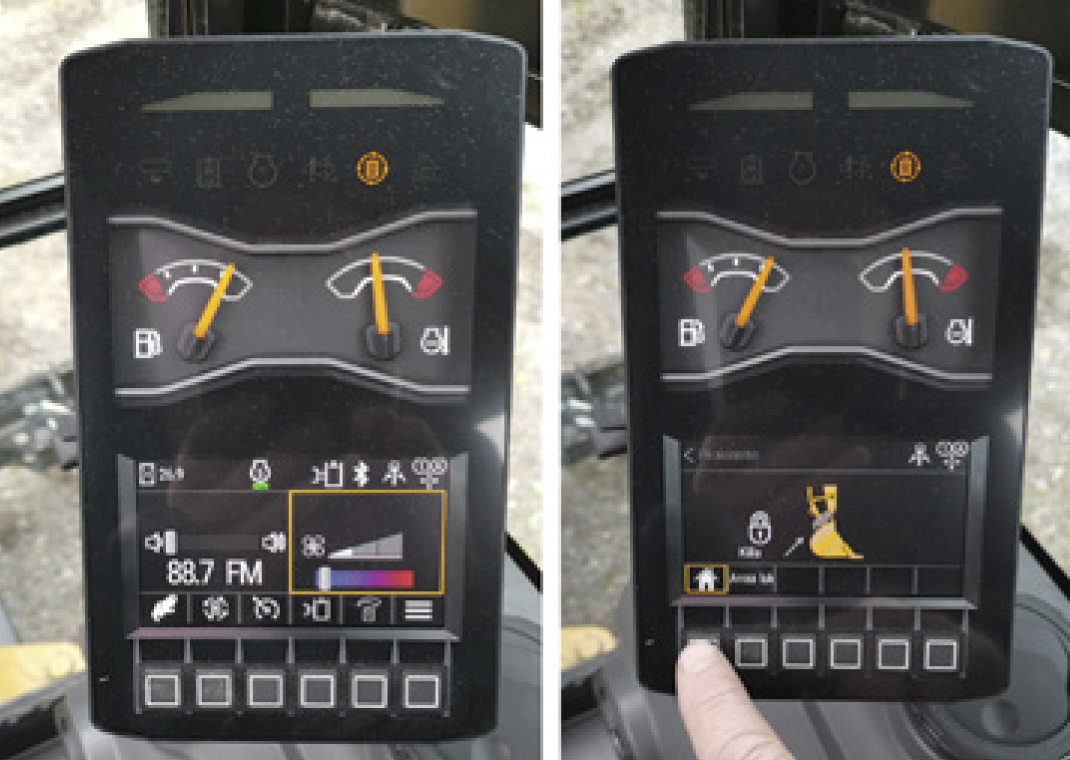 The initial screens looks like the picture on the left. The new command centre includes a variety of functions for both operator specific adjustments and controlling the AC/heater. The locking/opening of the attachment quick coupler can be controlled using the buttons under the display (right picture).

The engine markings are no surprise. It’s a Cat. The engine compartment of a small machine is small, but at least the filters can be easily accessed. And if the view from the back and side hatches isn’t enough, the whole cab can be tilted up.

There is a lot of glass in the cab and room enough for even a long-legged operator. Power transfer can now be controlled with the left digging lever, once the drive has first been activated from the yellow button and by pressing OK on screen. The pedals and levers are still there, though. And they are still needed when you need to operate both the drive and the digging motions simultaneously. 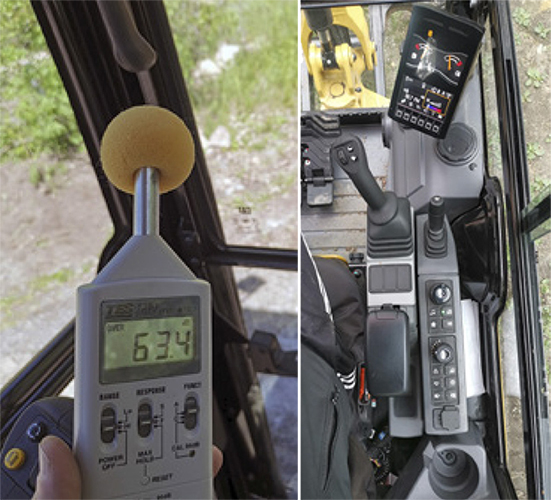 The LCD display can also be operated using the frontmost disc of the side panel. The second roller is for controlling engine revs. The cab is quiet. Idle noise is about 63 dBs.

With its more than two tonne operating weight, the Cat 301.8 is the second larges member of Caterpillar’s new 1-2 tonne mini excavator family. Features and technology, which are usually only seen in larger excavators, is being fitted to smaller and smaller machines. During the test drive, the yellow beast was used for various yard work.

At the beginning of the year, Caterpillar launched a completely new series of mini excavators in the 1-2 tonne size range. The series boasts many interesting and innovative technical solutions. For example, the left digging lever can now be used for driving. This is an extremely handy feature and easy to get used to even if at first your feet go to the driving pedals. Konepörssi was able to test drive the model 301.8 equipped with dozer blade with float and swing boom. It was used for a couple of days for various digging work in a yard. For example clearing out a parking space. Three different sized Rototilt buckets and a tilting coupler were used.

Mini excavators have become more popular by the year. They are very handy in handling work in tight spaces. Driver comfort is almost at the same level as in big machines and Caterpillar’s new excavator series is a great example of user-friendly innovation. The relatively spacious cab is easy to work in.

The Cat 301.8 weighs about two tonnes and using the 1,160 mm stick of the test driven excavator a dig depth of slightly over 2.5 metres can be reached. The other option is a slightly shorter stick of 960 mm, providing a dig depth of 2.370 mm. Even this is enough for digging trenches for pipes and cables in gardens and yards. With a total width of just under a metre (990 mm) when the undercarriage is retracted, the machine can be driven into some pretty tight spaces.

The undercarriage can be expanded hydraulically to ensure maximal support with a track to track width of 1,330 mm. In a small machine such as this, a wide base is more than welcome. When a tiltrotator is added to the end of the boom, the expandable undercarriage compensates in part for the strain added by the extra weight.

According to Caterpillar, all the new 1-2 tonne machines will be using as many same components as possible, which will make aftersale functions much easier. From the maintenance point of view, a great new feature is the tilt-up cab, which allows service personnel to easily access the hydraulic etc. components located in the undercarriage. Caterpillar promises that for example changing the alternator can be performed in an hour, where as before it could take triple the amount of time.

All of the 1-2 tonne machines are powered by Caterpillar’s own 1.1 litre C1.1 with a power of 14.4 kW. Emission wise, the engine is already at Stage V level.

The load-sensing hydraulic system provides digging, driving and swing with a maximum of 66 litres of oil per minute. In the two ﬁ rst circuits, the pressure is 245 bar and the swing circuit hydraulic motor has a pressure of 147 bar. This ensures that digging and driving simultaneously is no problem at all. The digging motions are very smooth and there is no trace of the angular movements often associated with small machines. Even on low revs there is enough speed for most jobs.

A machine this size is not used for high-speed digging, as it is more often used for levelling work and other tasks requiring more precision than speed. The Cat has both of these features in the right proportion. A testament to the machine’s speed is the fact that the upper carriage spins around 10.4 times per minute, which is even a bit faster than what the manufacturer says (9.8 r/min).

Power transfer has two speed settings, as is customary. Our GPS measurements give more or less the same figures as the brochure. The maximum travel speed at the high setting is 4.5 km/h and at the low setting 3.0 km/h.

The test drive machine had 230 mm wide rubber tracks, but there are also steel ones available, which add another 50 kg to the operating weight.

To give a few more figures, it can be mentioned that the fuel tank capacity is 26 litres and the engine needs 4.4 litres of new oil in oil changes and the entire hydraulic system has a capacity of 26 litres. The height of the machine to the top of the cab is 2,300 mm and the transport length is a bit over 3,700 mm. The swing angles of the boom are 50 degrees to the right and 65 to the left.

The cab is accessed through a doorway, which has a width of 550 mm at shoulder height. The left lever console slightly blocks the way, which means you kind of have to squeeze past it to get to the seat.

The cab is light and airy and maybe a bit larger than usual in the machine’s size class. The width at shoulder height is 910 mm, height is 1,460 mm and length is 1,200 mm. This is a rather comfortably sized space even for larger operators. The machine is started using the pushbutton under the right armrest. This means that having the key in your pocket when starting is enough. Before pushing the button, the power is turned on from the pushbutton’s disc. The Finnish-speaking LCD display located on the right upright pillar is controlled using the push buttons located under the screen (arrow and home buttons etc.) or using the spinning disc of the console. The spinning disc also tilts up, down and side-to-side, which enables the operator to move from one display to another. For example the heater blower setting is selected by tilting. The feature is activated by pressing the disc’s centre and the adjustment is done by twisting the disc. There is also a home button in front of the disc to enable an easy return to the initial display. This is the same system that is used in cars.

Operator-speciﬁc adjustments make it possible to save the preferred movement speeds. This is also a feature usually reserved for larger machines.

Engine revs are also adjusted using a spinning disc on the right. Most of the switches are located in this same console, including ones for the work light and windscreen wipers.